This Clean Up Kastellorizo Day has been replaced with the Recycling Project. Read more information below.

Thank you to all of you (total of 68) who participated in the Inaugural Katharo Kastellorizo Day 2008. The role-modelling that Australian and other tourists to the island displayed was wonderful. We had American, Italian and Athenian visitors join us in the clean up. We collected over 100 bags of rubbish and cleaned up around the Limani which was divided into 4 sections including the back streets, as well as Mandraki. Some people volunteered to clean St George of the Mountain, Ayia Triatha and Paleocastro. One local, Antonis Patiniotis (sea taxi owner) offered his boat to take 4 volunteers to clean the Limani. It is our intention to build on this event for next year. 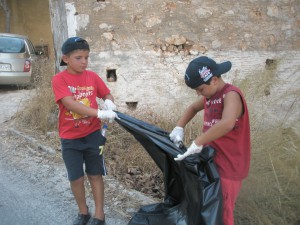 An Ouzo Bar was set up by the limani to thank everyone courtesy of Sylvia & Peter Parras and Eva & Dimitri Savvas. The Katharo Kastellorizo-Omorfo Kastellorizo caps handed out to all who participated on the day have become a collector’s item – thanks again to sponsor Victor Kailis of Kailis Fish Market Cafe of Fremantle.

The recycling program is proving to be successful. The initiative began in the summer of 2014 from interested people who live on the island and who form part of the newly formed Drasi organisation. There are over 300 collection bins in the community and in the first 3 weeks , they compressed 300kg of plastic materials. The materials are sent to Rhodes. Akis Kavidas, from the local supermarket, provides his truck to transport the materials to Rhodes to compress the bales of aluminium and plastic waste. Shop and restaurant owners are very positive about this initiative as it is reducing their own rubbish and contributing to better environmental sustainability. The recycling team are making two trips per day, early morning and mid-afternoon.

Thanks must go to many members who made a donation to the Recycling Project that is making a difference on the island.