Despoina Papoutsis  has won the 2015 National Prize for the Panhellenic Student Poetry and Short Story Competition. A quiet achiever, Despoina has written powerful words and added strong images to enhance her thoughts. The more you read the poem and look at the picture, the greater the impact. Her artistic excellence makes all of Kastellorizo very proud.

The illustrated children’s history, Kastellorizo: My Odyssey, written by Marilyn Tsolakis & J Andrew Johnstone is completed and now available for sale. It is a hard cover book that tells the story from the land’s point of view, because it is the land that has been present from the ancient to the modern times. In a sense, the land is a character that reveals its secrets over time. It is a bi-lingual book for readers in Australia, the English speaking world and Greece. Dr Platon Alexiou’s art work complements the poetic way in which the story is told.

Friends of Kastellorizo is pleased to announce that sponsorship has been secured for the printing of the book. With thanks to the generosity of Peter, Theodosios, Michael, Maria, Katrina and Victor Kailis families.

This is one very special book and there will only be 750 limited edition copies printed in Australia. 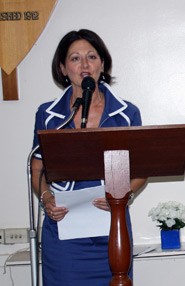 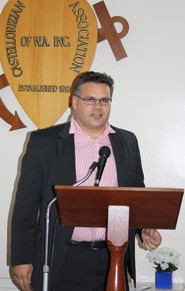 The author, Ethel Kanganas, and the artist, Margaret Sauer, have given permission for Orlif to be re-printed by the Friends of Kastellorizo who have also translated it into Greek. AFK has donated the Greek version to school students on the island. The Orlif project is one of many more literature projects planned to develop a greater appreciation of the island’s unique cultural heritage.

Travel often inspires people to write stories that are stimulated by their experiences of people and places they encounter. Ethel Kanganas wrote Orlif: the Gentle Giant after she returned from her trip to the tiny and remote Greek island of Kastellorizo in 1988. Ethel was inspired to write the fable as a way of giving something back to the Greek people. Orlif is Ethel Kanganas’ own literary creation and Margaret Sauer, of East Fremantle, illustrated it. While it is set on the small Greek island of Kastellorizo overlooking Turkey, it could be anywhere in Greece or any other part of the world as the environmental message is indeed universal. It is a story in the style of a traditional fairytale about loneliness and love, remorse and forgiveness and through this story, you are made aware of why it is important to plant trees.

Copies of Orlif are for sale for anyone wanting to purchase one for their children, grandchildren or friends. If you would like to purchase a copy at a cost of $20.00, it is available at the Peter’s of Kensington in Sydney, Lane Bookshop in Claremont (Perth), Hellenic Community, Evangelismos Parish Book Shop in Perth, Dentro Bookshop in Rodos, Megisti Hotel Kastellorizo and Damien and Monika’s on Kastellorizo or Friends of Kastellorizo at [email protected]